In 1998, the Corsica River was designated as “impaired” under the Clean Water Act.  In 2002, work began on developing a watershed restoration action strategy (WRAS)  for cleaning it up.  That work continues today. 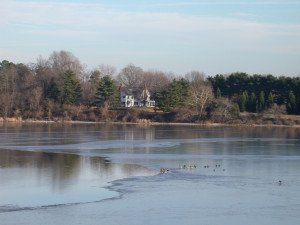 After the impairment designation, with the assistance of the Department of Natural Resources, and under a grant from EPA, a watershed assessment in a 100-mile stream corridor of the River and associated streams and natural resources found excess nitrogen and phosphorus, fecal coliform bacteria, excessive sediment, toxic materials including PCBs, and poor or very poor conditions for biological organizations.  (Results of the study, published in October 2003 can be found at https://dnr.maryland.gov/waters/Documents/WRAS/cr_char.pdf.)  The Corsica was deemed as needing restoration in four areas: sediments, nutrients, PCBs, and bacteria. Legally required limits, known as Total Maximum Daily Limits (TMDLs) were established for nitrogen and phosphorus.

Under the Town of Centreville’s leadership, a watershed restoration action strategy (WRAS) was developed in September 2004 and a stakeholders group was created to monitor and assist in its implementation.

The Goal of the WRAS was to remove the Corsica River from the 303(d) list  of impaired waterways. This goal was to be accomplished by putting in place the following 13 implementation strategies.

These specific strategies and measures have been modified over time but the major tenets remain in place.

Early efforts were slow to catch on

A Bay Journal article from March 2009 pointed out some of the difficulties in getting changes in residents’ behavior in its article “Corsica Cleanup Learns That More Than Money Is Needed to Succeed.”

“What the Corsica needs is more public participation,” said John McCoy, director of the Maryland Department of Natural Resources Ecosystem Restoration Center, who coordinated state activities in the watershed and was quoted in the article. “What it takes to get that, we haven’t figured out yet.”  He and others said many watershed residents had not bought into restoration efforts, according to the article. In fact, many appeared to be unaware of the targeted effort, despite mailings that had gone to every household, information packets sent to new residents and other outreach efforts.

“I’ve gone out and given dozens of lectures to local citizens groups, and usually what I find out is that these people are really unaware of what is going on,” said Jim Malaro in the article who was a previous president of the conservancy. “I’ve had people ask me, ‘Where is the river?’ That is telling.”

Several years into the restoration effort, projects on public lands, such as wetlands restoration, and institutional decisions made by town and county agencies set the stage for individual landowners to also take action.  Work on the Town Wharf in Centreville expanded access to the River.  On private lands, rain gardens were the most popular efforts, in large part because of the ease of installation and cost sharing requirements. Installing upgraded septic systems, a more complicated process, lagged significantly.  On farmland in the watershed, only about a third of the 6,000 acres of cover crops called for in the plan had been planted according to the 2009 article. Only about a tenth of the goal of enrolling 100 acres in the Conservation Reserve Enhancement Program, which pays farmers to take environmentally sensitive lands out of production and restore them, had been met. Efforts to implement horse pasture management was also lagging.

Getting sufficient participation in funded programs was only part of the challenge.  Even under lands planted with cover crops, in which sharp decreases in nitrogen had been recorded, results in water quality lagged because it takes years for these improvements to work their way through groundwater.

“Cleaning up the Corsica takes a lot of patience,” said Frank DiGalleonardo, currently Board President, as the Conservancy continued with its education, outreach, and programmatic efforts.

Has any progress been made?

The answer is yes.  A progress report, covering the period of 2005-2011 and issued in 2012 found a slight improvement in River health.  (For the full report, see https://dnr.maryland.gov/ccs/Publication/Corsica_report.pdf).  In 2019, MDE issued a follow up report, conducted by staff of the Interstate Commission on the Potomac River Basin, which had even better news, showing a significant and improving nutrient reductions in the three tributaries of the Corsica River. Both the long term (2006-2017) and short term (2012-2018) trends in total nitrogen are significant and decreasing for all three. Long term trends in total phosphorus concentrations are significant and downwards for all three as well. However, only the Gravel Run tributary showed a significant short term difference in phosphorus. (For the full report, see https://www.potomacriver.org/wp-content/uploads/2019/08/ICP19-2_Wallace.pdf

The results indicate that the many Best Management Practices (BMPs) that have been installed throughout the Corsica River Watershed during its ecosystem-wide restoration appear to be having significant and largely increasing effect. .

Today, the Corsica River Implementors Committee meets monthly to continue work on improving the health of the Corsica River and its surrounding ecosystem.  It consists of representatives from state, county, and town agencies, scientists, and local non-profit groups.  These include Maryland’s Departments ot the Environment (MDE), Natural Resources (DNR), Planning, and Agriculture (MDA), Queen Anne’s County Department of Public Works & Planning and Zoning and the Soil Conservation District, the Corsica River Conservancy, ShoreRivers, the Master Gardeners Program, and the University of Maryland.